Oh dear, where to begin? It’s been 18 months since L2Ork’s last post. This is in good part because I was on a year-long research leave. As can be expected, a lot happened during this time. Our program got formidable reinforcements, Drs. Eric Lyon, and Charles Nichols, the new Moss Arts Center with amazing ICAT facilities opened, DISIS is moving into a new and amazing space at the end of this semester, and we’re hosting SEAMUS national conference this coming March.

All along L2Ork remained active on many fronts. Charles, having taught L2Ork for the past year, joined me in managing the ensemble. We’ve continued development of pd-l2ork at a staggering pace (check out our latest screenshots for screenshots of  SVG-enabled patch canvas goodness). The Raspberry Pi version in particular has seen addition of new objects offering a comprehensive alternative to Arduino platforms. Last week, we utilized pd-l2ork in “Cloud,” an interactive art installation commissioned by the Ballston Business Improvement District (BID), and in part sponsored by Virginia Tech’s ICAT where 50 cloudlets were equipped with Raspberry Pis and programmed through a series of community workshops. We had over 150 participants working in teams and perhaps what I found to be particularly impressive about this experience (apart from the fact that the event and the ensuing art was an overwhelming success), was the age range of participants–we had families with small children all the way to senior citizens, all successfully completing the 75-minute workshop and producing a working cloudlet with no prior progamming experience required! Talk about making pd-l2ork accessible to all ages :-). “Cloud” is currently located in the main lobby of Virginia Tech’s National Captial Region (VT NRC) building and will stay there until the end of this month.

Pd-l2ork has seen dozens upon dozens of new releases, with another big one coming up. We have now more contributors and developers and are preparing for a historical jump away from the aging tcl/tk toolkit to the ubiquitous and Qt library (not to be mistaken with Apple’s Quicktime). We have continued to work with Boys & Girls Club of Southwestern Virginia, and in collaboration with the Montgomery County Public Schools have also expanded our summer Maker activities to gifted programs. As a result, this summer we held our inaugural Raspberry Pi Orchestra workshop where dozen children over three days and 9 hours of workshops successfully designed, developed, and utilized their own instruments. Our summer Maker camp was sold in less than 48 hours and was by far the most ambitious and successful yet. Last fall we premiered another exciting project–OPERAcraft, that also utilized pd-l2ork to coordinate real-time opera production our in-house custom Minecraft mod. And the list goes on…

This semester, we have a strong group of dozen energetic performers and I am excited by the upcoming program. We have also refreshed our VT student organization and elected new officers. Stay tuned for further announcements over the next couple of weeks. Until then, L2Ork on! 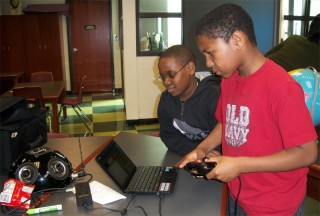 Yes, the rumors are indeed true. Last fall L2Ork has partnered up with the Boys & Girls Club of Roanoke, VA and the Music Lab at the Jefferson Center and with the help of grants from 21st Century and Bank of America, we are now in the process of designing and building a satellite laptop orchestra for the 5th graders. As excited as we are about our upcoming version 2.0 of our shiny hemispherical speakers, we simply had to share this photo with everyone. The red hemispherical speakers offer a number of structural improvements over the old design, as well as the new red look. The new hemis have already become famous among l2orkists as “ladybugs.”

As part of our ongoing partnership with the Boys & Girls Club, this coming Friday we will be hosting 5th graders here at Virginia Tech DISIS who will assist us in building the remaining “ladybugs” as well as have an opportunity to interact and “jam” with VT l2orkists. The event will be held on Friday March 19th 3:30-5:30pm (EST) in DISIS. We would like to use this opportunity to also cordially invite all VT Stakeholders to join us in celebrating this exciting event. For directions to DISIS, please click here.

To top this all off, I have a number of other exciting announcements to share with you, so stay tuned for more updates.