Over the past several years most of the L2Ork’s activity shifted to the social media channels, most notably the Facebook. L2Ork has continued to grow and develop. This semester we have 15 members. We are developing a new affordable controller (a.k.a. NIME) that will enable greater expressive range. In the fall 2016 we introduced World’s first Raspberry Pi (RPi) Orchestra, starting with an arrangement of Brian Eno’s An Ending (Ascent). We also began exploring broader aesthetics–with the introduction of the RPi Orchestra, we discovered one of our former members Savannah Allen having an amazing talent for rap which has led to L2Ork’s first Rap piece L2Orkin’ Around with the lyrics by Savannah (check out the excerpt here). Most recently, we have been gearing up for a premiere of a new piece inspired by the Alien franchise that also utilizes an accompanying video footage. The plan was to premiere it today as part of the annual Virginia Tech School of Performing Arts scholarship fundraiser concert titled Exposition: Cinescapes. Alas, due to a major snow storm, or what some refer to as snowpocalypse, the event was cancelled. As a result, the Alien will be premiered at the Spring DISIS event.

For those seeking pd-l2ork, rest assured, the project is alive and well. Thanks to the efforts of Jonathan Wilkes and Albert Graef its development has shifted to the 2.x branch that now supports all major platforms and uses Node.js for all its GUI needs. There is still work left to be done before we completely abandon the 1.x branch, most notably the K12 module that remains to be ported. This summer, pd-l2ork has been selected as one of the Google Summer of Code projects. The deadline for application is only day away, but there is still time to apply. For students interested in participating, please subscribe and post your interest on the l2ork-dev mailing list.

This summer, Virginia Tech SOPA and DISIS in collaboration with ICAT, as well as University of Virginia are proudly sponsoring New Interfaces for Musical Expression 2018 international conference. For more info, visit NIME 2018 website.

As we prepare for our presentation at this year’s NIME conference (for those attending NIME you can see us during the 130pm demo session later today), it is my great pleasure to announce a new version of Pd-L2Ork programming environment (the backbone of our software infrastructure) featuring the K-12 learning module prototype. Geared specifically towards K-12 students, the newfound module addresses the lack of a robust sound- and music-oriented programming tool for elementary, middle, and high-school students. The current prototype is a first step towards a tiered granular design of learning objects that aim to recontextualize pd-l2ork into a K-12 learning tool. The resulting first iteration offers a limited set of coarse-grained objects geared primarily towards 4th and 5th graders. This, however, has not deterred Boys & Girls Club of Southwest Virginia students participating in the afterschool program from making some quite evolved instruments using Nintendo Wiimotes and their satellite laptop orchestra in less than three sessions 1-hour–a rough-cut video footage of our most recent session with the students after the break.

For more info on Pd-L2Ork see our Software page. To enable the K12 mode, simply start pd-l2ork with the -k12 flag as follows:

Isn’t it ironic that I would finally find a few moments to blog right on April 1st? Now, who will actually believe anything I write? Add to that earlier prank on our Facebook page and we’re definitely not boding well in the “we’re-not-kidding” department.

So what’s new in the wondrous world of L2Ork? With the new Institute for Creativity, Arts & Technology (ICAT) research engine revving up, things have been particularly intense over the past couple of months. pd-l2ork development has been also intensifying. The latest version (no April fool’s joke) includes intuitive tooltips, infinite undo, an array of GUI improvements, and a revamped Wiimote connectivity.

The most notable development is the upcoming performance at the first international Symposium on Laptop Ensembles & Orchestras that will take place at Louisiana State University April 15-17. L2Ork will be one of the four guest ensembles (also featuring European Bridges Ensemble, LSU’s Laptop Orchestra Louisiana, Mobile Performance Group, and Princeton’s Sideband) performing on April 16th @ 10:30pm in the Varsity Theatre. Hope to see you there!

I am also pleased to report we’ve had two additional publications accepted to conferences, including aforesaid SLEO, and the upcoming NIME conference. One deals with our ongoing work on integrating Taiji mind-body practice, while other is explores our most recent project in collaboration with the Roanoke’s Boys & Girls’ Club of Southwest Vriginia.

The other day, most of the l2orkists added their own signatures on the beams that will soon find their way into the new Center for the Arts at Virginia Tech. The center will also be the home of the aforesaid ICAT. Until I upload the latest photos from my camera, check out our Twitter feed for a photo from the event.

Lastly, on April 30th, L2Ork will be also performing at home in the Studio Theatre as part of the spring 2012 DISIS event. We also have some special guests planned for this event so stay tuned for more exciting updates soon! Until then, happy April Sages day everyone :-)

There and Back Again 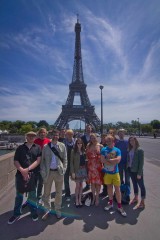 Can’t believe we are less than four hours away from home. Currently waiting at Newark airport for our last connection to Charlotte, NC where Michael and Alec will be waiting with two 12-passenger vans to take us back to Virginia Tech (approx. 2.5 hour ride from the airport).

Looking back, it’s been an amazing three weeks full of surprises, twists, turns, curve balls, and stories we all will be retelling for many seasons to come. More importantly, it’s been a tour filled with successful performances.

Last night, we played as part of the closing concert at the international NIME conference in Oslo, a performance that I think was particularly well received. As I write this, my computer is slowly chewing on the video footage which I will be uploading to our YouTube page as soon as it is done.

Yesterday, I also received an email informing me that another interview aired on Croatian National TV (HTV) as part of the e-Hrvatska show covering our performance in Zagreb. You can view the video here.

I would like to use this opportunity to once again sincerely thank our Stakeholders who have generously sponsored this gargantuan undertaking. Likewise, I would like to thank our guest soloists Ron Coulter and Aurora Martin who have been brave (crazy? :-) enough to partake in the tour. I would also like to acknowledge my European Colleagues who have helped me coordinate venue planning, Robin Gareus, Marc Groenewegen, and Martin Kaltenbrunner. Finally, I would like to thank all l2orkists for their selfless contributions and sacrifices that have made this tour possible. Have a great summer all! You’ve definitely deserved it!