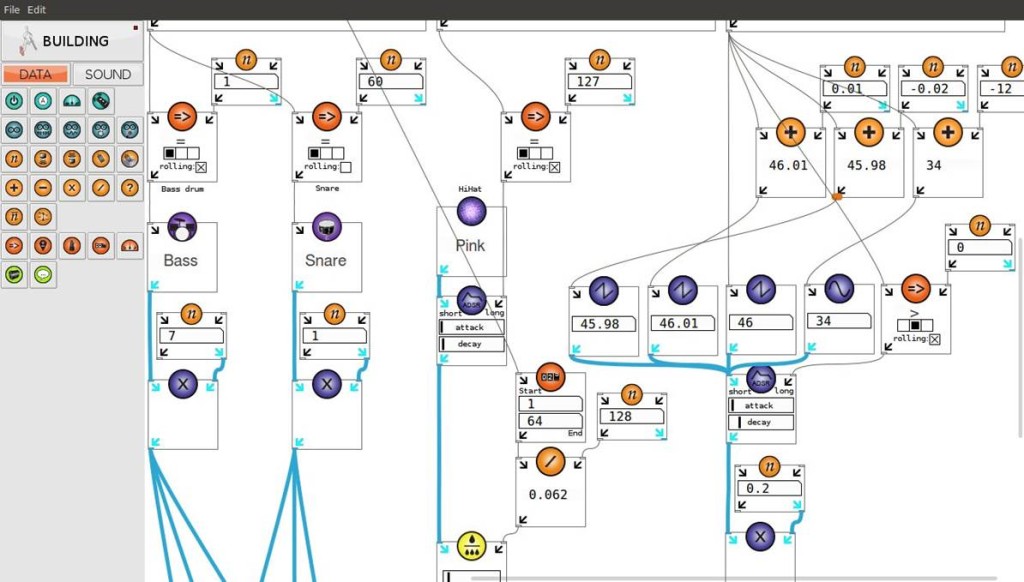 The fastest way to get a working L2Ork-compatible software setup is to:

The “Burrito Supreme” installer will provide you with all components necessary to have a setup equivalent to that of Pd-extended. The L2Ork abstractions are necessary only if you want to create/perform pieces specific to the L2Ork ensemble setup. These are not necessary for running the K12 module.

The instructions and download links for each of these steps are provided below.

IMPORTANT! If you are manually installing a deb file or trying to build your own version of pd-l2ork from scratch and find specific dependencies not satisfied, please contact us to report such inconsistencies. If you are looking to compile your own Linux version of pd-l2ork or wish to use a script-based tarball installer and want to make sure you have all the necessary libraries Pd-L2Ork relies on, the easiest thing is to copy and paste the following apt-get code (please note the following package names have been tested with the latest LTS version of Ubuntu; other versions may not require/offer all of these packages and/or other distributions’ package names may vary):

The said code will install the necessary libraries and their supporting dev components. This will enable you not only to run the software but also build it from the source, should that prove necessary. Having dev libraries installed should have no negative impact on your system beyond taking up a bit more of the HD space than the libraries alone.

IMPORTANT! All Pd-l2Ork installer tarballs use unique identifiers/paths, so they should coexist happily next to other installs of Pd. This, however, also means that they may not be able to find externals belonging to other preexisting Pd installs and that is a good thing since Pd-l2Ork changes some of the files externals may rely upon and as such mixing Pd-l2Ork with externals from other Pd iterations may result in unexpected crashes and instabilities. Therefore, to ensure maximum stability please couple Pd-L2Ork only with externals provided on this page or recompile your own making sure you are referencing appropriate source files.

As of July 2015, Pd-L2Ork deb installer does not conflict with any of the Pd-vanilla or Pd-extended packages, allowing for various flavors of Pd to happily coexist on the same machine. Yay!

This is by far the easiest way to install Pd-L2Ork. Simply follow the instructions for the respective distribution (e.g. Launchpad for Ubuntu, or Aur packaging documentation page for Arch Linux).

This will install all the supporting libraries, warn you of any conflicts with other packages (e.g. pd-utils), as well as set up pd-l2ork on your machine.

If you encounter errors due to missing packages, this is most likely because you did not install supporting libraries listed at the top of this page. You can, however, correct this easily by running the following command:

If everything goes well, you will be presented with an option of installing a collection of packages. Please review that you are ok with installing/removing suggested packages and if so, press “Y” to continue. Once this process is complete, pd-l2ork should be installed and ready for use.

Script-based installer provides precompiled binaries that are by default installed in /usr/local folder. If you need to recompile your own version see the Compiling Pd-L2Ork from Source section below instead. To install, unzip the tarball and simply run the install script.

This will install everything with the /usr/local prefix.

Once install process is complete, to run Pd-l2ork simply type:

Please note that running pd-l2ork with no start-up flags will provide you with default (conservative) settings which will likely result in poor audio performance. For optimal perfomance you will ideally need a lowlatency kernel, an audio group with real-time privileges, using JACK audio server, and running pd-l2ork with -rt flag. The easiest way to achieve this is to:

If you are using Ubuntu Unity and have the shortcut in the Ubuntu Launcher, right-clicking on the shortcut will provide you with additional options.

IMPORTANT! Compiling is typically not for the faint of heart. Pd-L2Ork, however, tries to make this a relatively simple 3-step process. First you will need to make sure to install all the dev packages (or their counterparts in your respective Linux distribution) listed at the top of this page. Once ready, click on the arrow below for the step-by-step instructions.

The easiest way to create your own installer tarball or deb package containing pd-l2ork and all supporting 3rd party externals is to simply download the latest snapshot from the git repository. When retrieving the source for the first time, in a new empty folder type:

Alternately, if you simply need to update your local snapshot with the latest changes, go into the root git directory (if you used the command above, it will be the pd-l2ork folder) and type:

Once you have the latest version of the source, simply compile using l2ork’s nifty tar_em_up.sh script.

For other options available through the tar_em_up.sh install script, run the script without any flags, namely by typing:

For compiling the deb installer (a.k.a. deb package) do the following:

This will recompile entire source tree (including externals) using default “–enable-jack –enable-alsa –enable-fftw” Linux flags and create a “Burrito Supreme” deb in the folder where the original git folder was created containing the pd-l2ork/ folder. Once the tarball is created, to install it on your own computer, go back to the appropriate directory and install it using deb tools (e.g. gdebi, dpkg, etc.):

For script-based tarballs do the following:

This will recompile entire source tree (including externals) using default “–enable-jack –enable-alsa –enable-fftw” flags and create a “Burrito Supreme” tarball in the folder where the original git snapshot was downloaded (the one containing the pd-l2ork/ folder). Once the tarball is created, to install it on your own computer, go back to the appropriate directory, decompress the tarball and run the installer using the same instructions as the “Burrito Supreme” installer: